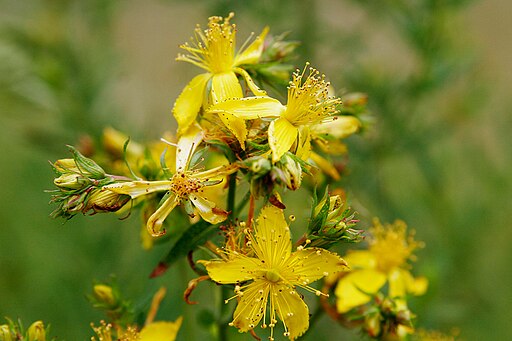 Today I want to write a little more about St. Johnswort a medicinal herb I use to relieve my symptoms of depression and anxiety due to living with PTSD. I have been mentioning it before both in posts and tweets but never gave more information about it and I think there are 5 Things to Know about St. Johnswort.

In Germany where I come from St. Johnswort is a herb that is readily prescribed for mild and moderate depression. Before I came to the UK I had been using it for years and was aware of some of the side effects like becoming more sensitive to sunlight and getting a sunburn more easily for example.

You can imagine how I was surprised when my doctors here told me that it is not usually used and not enough is known about its effectiveness for depression. Now, that was ten years ago and I am glad that this misconception has changed a little. However, it is still not prescribed by GP’s as at least in the Uk it is an unlicensed herbal remedy.

On the other hand, though the mental health charity Mind dedicated a whole page to St. Johnswort and how it works. And there are many other pages out there that give you information on it.

What is St. Johnswort and how does it work?

This is what Mind the mental health Charity says:

What is St John’s wort?
St John’s wort is a herbal remedy that has been used for hundreds of years to treat mental health problems. Today it is mainly used as an over the counter remedy to treat mild and moderate depression, seasonal affective disorder (SAD), mild anxiety and sleep problems.

The botanical name for St John’s wort is Hypericum perforatum, and it is sometimes marketed and sold as ‘Hypericum’. It contains the ingredients hypericin and hyperforin, that have been used for their antidepressant properties.

How does St John’s wort work?
It is thought that St John’s wort works in a similar way to standard antidepressant medication. Research suggests that it increases the activity of brain chemicals such as serotonin and noradrenaline that are thought to play an important part in regulating our mood.

As well as hypercin and hyperforin, the plant contains many other substances that may boost its antidepressant activity in ways that are not yet fully understood. (Mind ~ St John’s wort – Hypericum perforatum)

What are the 5 Things to know about St. Johnswort?

1. St. Johnswort is as effective as antidepressants for mild and moderate depression.

There have been many trials using St. Johnswort both for major and minor/moderate depression over the years which had not much impact. However, a couple of years before I came to the Uk the British Journal of Psychiatry did a meta-analysis of randomised control trials with St. Johnswort which concluded:

“…In summary, by adding the large studies that have recently been conducted to the existing body of research, the evidence suggests that St. John’s wort is a viable treatment for mild to moderate major depression. Importantly, there is considerable variation in the preparations of St. John’s wort available over the counter. The researchers say that their findings apply only to the extracts that were used in the studies in this review, or possibly to very similar preparations. People who want to take St. John’s wort should speak to their doctors about the best preparation for them, and the risks and benefits compared to standard antidepressants….” (NHS Choices ~ St. Johnswort for Depression)

In comparison to that, the National Center for Complementary and Integrative Health of the US Department of Health and Human Services mentions a 2009 systematic review of 29 studies that suggests St. Johnswort may be better than a placebo and as effective as standard antidepressants.

However, they conclude the effectiveness of St. Johnswort for depression is inconclusive as their own studies had no positive results. (National Center for Complementary and Integrative Health ~ St. Johnswort and Depression. In Depth)

2. St. Johnswort is researched and proven

Dr. Natalie Bozinovski talks about Canadian trials and gives you more information to St. Johnswort in her video here:

3 & 4 There are side-effects to St. Johnswort but less than those using standard anti-depressants

According to Wikipedia there are several possible side-effects like

Well, looking at that it sounds quite a few possible side-effects to me. I, however, have never experienced any of these and as I do not take any other drugs or the pill interactions never were an issue.

I assume these are possible but happen a lot less than using standard anti-depressants but I have to do some more research there.

5 Be Careful Where You Get it from

St. Johnswort is in most countries an unlicensed herbal remedy and therefore not as well regulated as licenced remedies. Make sure if you want to use it to see a health professional or homoeopath to find a trusted source to buy St. Johnswort.

A personal review of St. Johnswort by Emily Faith

What do you think?

In my opinion, it is a highly personal choice which way you go to deal with depression. There are many reasons for using standard antidepressants but also many reasons for going the complementary way. For me, it has always worked better without standard drugs but with herbs, therapy and creativity. However, I know many who have chosen a different path. I am curious: Which path have you chosen and why? Please let me know in the comments!